State of the Field: The Transforming Role of Public Art - Contextualizing History and Redefining Public Space

Presented by the Urban Planning Program

In 2017 as a response to public outcry regarding the appropriateness of statues honoring
figures with controversial histories, a New York City Mayoral Advisory Commission was
established. The Commission’s role was to advise and make recommendations on the creation
and removal of City Art, Monuments and Markers. A report was issued in 2018 and since then
public activism, protests and scrutiny of our shared public spaces has increased exponentially
within New York City and throughout the country. This talk will examine some successful public
memorialization efforts and how communities are actively challenging the role historic
monuments play in reinforcing often limited and exclusive interpretations of history. People are
demanding that public spaces be redefined and reimagined to reflect expansive and inclusive
narratives that more accurately express shared histories and contributions of diverse
communities and constituencies. Government officials, planners, designers, historians,
educators and CBOs must require interactive planning and design processes that acknowledge
cultural complexity and contextualize history. We intend to present how this understanding can
facilitate meaningful dialogue and allow the successful transformation of public space to take
place.

Rodney Leon, is founder and principal of Rodney Leon Architect PLLC. Mr. Leon has focused
his professional efforts and developed an expertise in Memorialization, Master Planning and
Mixed Use Urban Development. He is the designer of the African Burial Ground Memorial in
New York City which is the first National Monument in the United States dedicated to the
contributions of people of African descent. Mr. Leon is also the winner of the international
competition by the United Nations to design the Permanent Memorial to the Victims of Slavery
and the Trans-Atlantic Slave Trade. His winning entry entitled “The Ark of Return’, was unveiled
at the United Nations Plaza by Secretary-General Ban Ki-moon on March 25 th , 2015. Mr. Leon
received his Bachelor of Architecture degree from Pratt Institute School of Architecture in 1992
and his Masters of Architecture from Yale University in 1995. He has served as Adjunct
professor at Pratt Institute School of Architecture and NYU Schack Institute.

NYU Wagner provides reasonable accommodations to people with disabilities. Requests for accommodations for events and services should be submitted at least two weeks before the date of the accommodation need. Please email adrienne.smith@nyu.edu or call 212.998.7400 for assistance.
Register to Attend 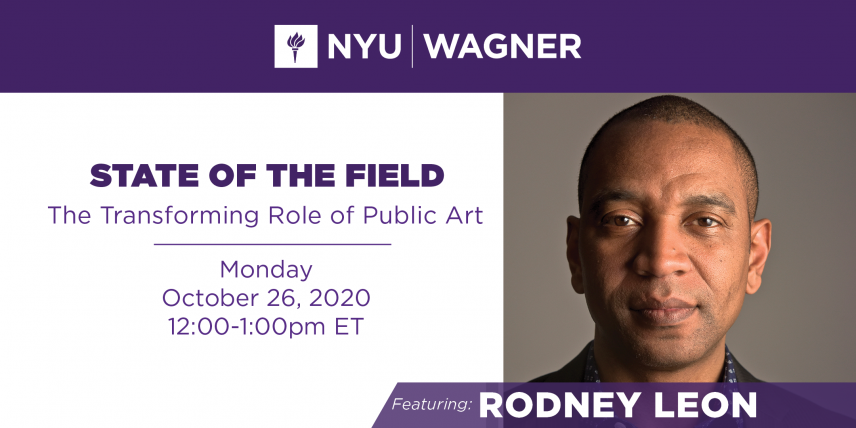