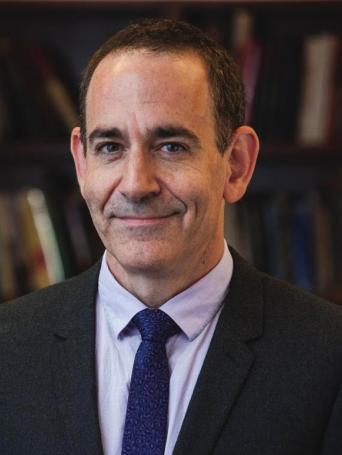 With a joint appointment in History and at Wagner, Timothy Naftali, a Clinical Associate Professor of Public Service and a Clinical Associate Professor of History, is director of NYU's undergraduate Public Policy Major. A native of Montreal and a graduate of Yale with a doctorate in history from Harvard, Naftali writes on national security and intelligence policy, international history and presidential history. Using Soviet-era documents, he and Russian academic Aleksandr Fursenko wrote the prize-winning One Hell of a Gamble: Khrushchev, Castro and Kennedy, 1958-1964 and Khrushchev’s Cold War, the latter winning the Duke of Westminster’s Medal for Military Literature in 2007 and inclusion on Foreign Affairs’ 2014 list of the ten best books on the Cold War. As a consultant to the 9/11 Commission, Naftali wrote a history of US counterterrorism policy, published as Blind Spot: The Secret History of American Counterterrorism. Most recently, with Peter Baker, Jeffrey Engel and Jon Meacham, he wrote Impeachment: An American History.

Naftali came to NYU Wagner after serving as the founding director of the federal Richard Nixon Presidential Library and Museum in Yorba Linda, California, where he authored the Library's nationally acclaimed exhibit on Watergate and oversaw the release of 1.3 million pages of presidential documents and nearly 700 hours of the infamous Nixon tapes.  Naftali, whose work has appeared in The New York Times, The Atlantic, CNN.com, The Los Angeles Times, Slate and Foreign Affairs, is a CNN presidential historian. Most recently, he was featured in CNN’s The 2000s, Presidents Under Fire: The History of Impeachment and The Bush Years: Family, Duty, Power.  In addition, he served as historical consultant to the CNN Original Series "Tricky Dick" and the NETFLIX series, Designated Survivor.

The past five years have forced a national reexamination of the institution of the American presidency. And the effect has been traumatic. Allies of former President Trump celebrated the disruption of presidential “norms” in support of populist ideals. Supporters of President Biden bemoaned the disappearance of those “norms” and saw, especially on January 6th 2021, the threat that a resurgent “Imperial Presidency” posed to American democracy and its constitutional system. This course will introduce students to the evolution of the presidency, especially its phases in the modern era. Besides providing an historical context for the 45th and 46th presidencies, the class will examine the nuts and bolts of the most powerful executive position in the World. What role have modern presidents played in shaping our economy, our institutions, our environment and the global system? Are there any limits on presidential power at home and abroad? How were these limits established and, under our constitutional system, can they be undone? How have the nuclear and digital ages and this extremely partisan moment affected those powers? What role does the character or personality of the incumbent play in the functioning or effectiveness of a presidency? More specifically, to what extent have modern presidents added to, lessened or simply ignored the racial, social and environmental injustices and economic disparities that tarnish and contradict the promise of this country’s founding documents. The core objective of this course is to assist students in acquiring the knowledge and analytical skills to assess any American presidency and understand its role in shaping the United States and the wider world.

. How to Abuse a Presidential Pardon. https://www.theatlantic.com/ideas/archive/2020/12/how-abuse-presidential-pardon/617473/
. The Many Successes of Jimmy Carter -- and His Ultimate Failure.

Book review of "The Outlier", the biography of Jimmy Carter, for The New York Times Book Review.

. The Senate Should do everything it can to avoid a Zombie Impeachment Trial.
Christopher White. Biden and Pope Francis could make a climate change miracle. https://foreignpolicy.com/2021/01/31/biden-pope-francis-climate- change-miracle/
. The Worst President in History. https://www.theatlantic.com/ideas/archive/2021/01/trump-worst- president-history/617730/
. The Genie is Out of the Bottle. https://www.politico.com/news/magazine/2021/01/13/donald-trump-impeachment-politics-459184

Book Review of Tim Weiner’s The Folly and The Glory, Washington Post, October 22, 2020.

. What Happens when Presidents Get Sick. https://foreignpolicy.com/2020/10/03/when-presidents-get-sick-history-secrecy-subversion-lies/
. A Perilous Presidential Handoff. https://foreignpolicy.com/2020/09/24/trump-transition-us-election-perilous-presidential-handoff-refuse-peaceful/
. Book Review for Rigged, “How Generations of Russians Have Tried to Influence American Elections. https://www.nytimes.com/2020/06/30/books/review/david-shimer-rigged.html

Aleksandr Fursenko, Timothy Naftali. "One Hell of a Gamble:" Khrushchev, Castro and Kennedy, 1958-1964 (The Secret History of the Cuban Missile Crisis).