November 2016 – A new report, by NYU Wagner and the Center for an Urban Future with support from the Citi Foundation, published today highlights the ways in which mayors and city managers are using new approaches to address some of the biggest challenges facing society, whether combating entrenched poverty, financing new infrastructure projects, or protecting the environment. The report profiles 15 of the most innovative urban policies launched by cities over the past decade, highlighting pioneering programs that were launched in cities from Chicago and Seattle to Nairobi and São Paulo. 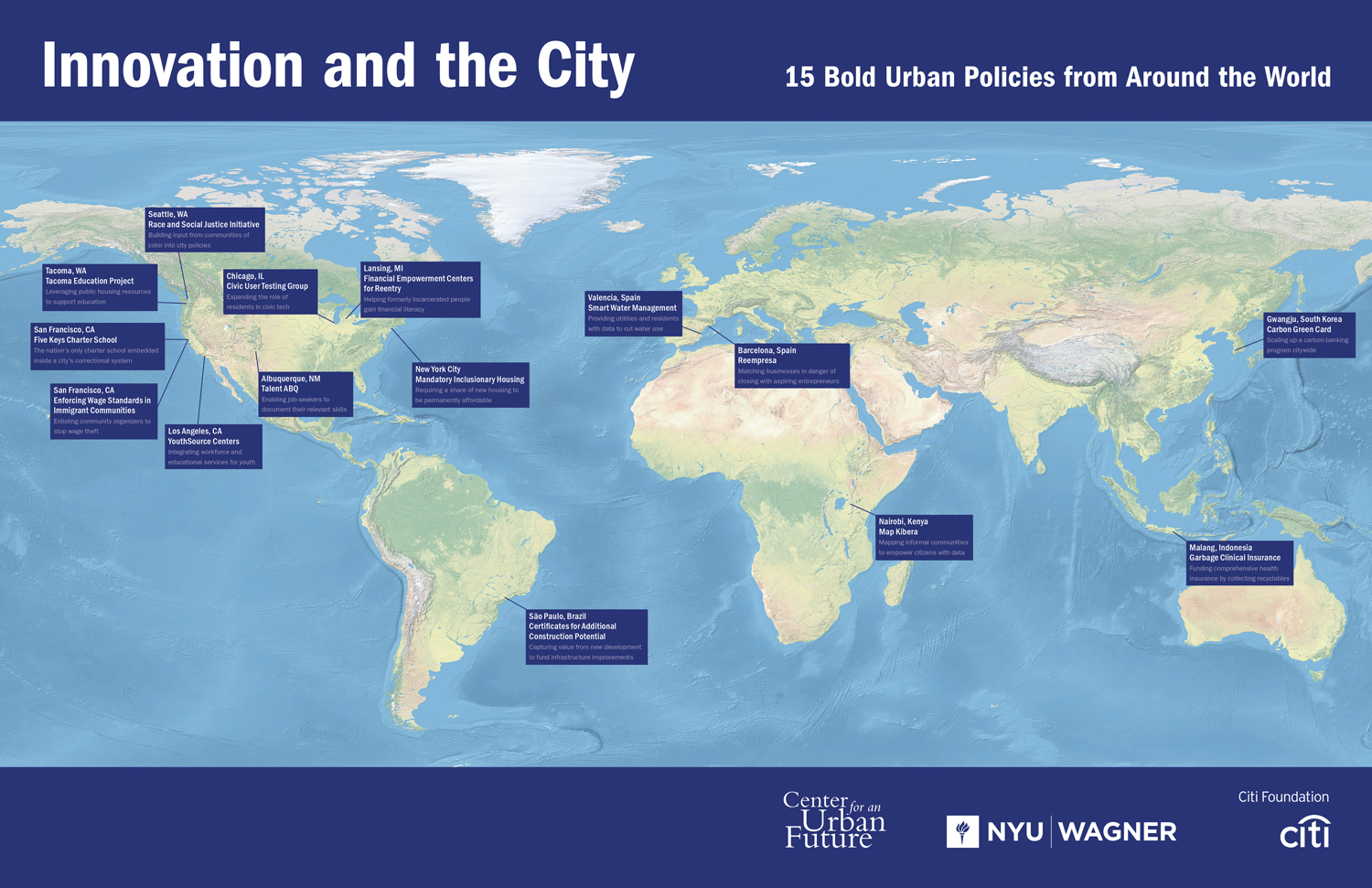 The 15 urban policy reforms were selected by researchers from NYU Wagner and the Center for an Urban Future after conducting hundreds of interviews with mayors, agency chiefs, policy experts, academics, business leaders, labor unions and philanthropic foundations.

“Dynamic and effective city policies can be found in every corner of the globe, and the impact of these programs is astounding,” said Neil Kleiman, Director of NYU Wagner Innovation Labs, who co-authored the report. “Policymakers would be wise to look to other cities for inspiration when trying to solve major societal problems.”

“At a time when there is a growing discourse on how best to address urban problems, cities have stepped forward and developed an array of pioneering new policy solutions,” said Jonathan Bowles, Executive Director of the Center for an Urban Future. “These innovations happening in cities around the globe should be brought to the forefront as models for scalable impact.”

“Real and lasting change is happening across cities in the U.S. and around the world,” said Ed Skyler, Citi’s Head of Global Public Affairs, Chairman of the Citi Foundation and a former New York City deputy mayor. “These wide-ranging examples of innovation at the public policy level show how we can address longstanding challenges and improve the lives of residents globally.”

The cities and programs profiled in the report include:

“YouthSource Centers are about the future we are building for Los Angeles: where we are committed to partnering with all those who strive to better themselves through work and education. Where college is within reach for all students. Where every family has somewhere to turn for help when making big decisions that position young people for a lifetime of success. There is no substitute for the information, free resources, and contagious sense of hope that YouthSource Centers bring to our communities. And in neighborhoods across L.A., they are transforming how Angelenos think about the possibilities that lie ahead.”

“To realize our full potential as a City we must dismantle the institutional racism that systematically excludes too many of Seattle residents from our political processes. Only when we fully integrate the voices of people of color, low-income residents, and limited English speakers in our civic discourse will we become a world class city that effectively address racial disparities and ensures everyone has equal access to our success.”

“It is my firm belief that when you invest in your people, you invest in your place. Here in Albuquerque, we are focused on creating a world-class workforce not only to attract new business to locate here, but also to provide economic mobility for our people. We are proud of the innovative approach that Talent ABQ brings to the modern-day workforce; helping people skill up for good jobs and helping businesses get the talent they need to succeed.”

“Financial empowerment is an explicit part of our economic development strategy because the financial wherewithal of our citizens forms the foundation of our shared prosperity. This is especially true for re-entry citizens, who clearly benefit from professional financial coaching as they transition back to society after a period of incarceration.”

“We are incredibly proud of our newly minted Mandatory Inclusionary Housing law. It represents a new contract with communities that is already working to make New York a fairer and more equitable city for millions of families and businesses – and will for generations of New Yorkers to come,” New York Mayor Bill de Blasio.

About Center for an Urban Future

The Center for an Urban Future (CUF) is a catalyst for smart and sustainable policies that reduce inequality, increase economic mobility, and grow the economy in New York City. An independent, nonpartisan policy organization, CUF uses fact-based research to elevate important and often overlooked issues onto the radar of policymakers and advance practical solutions that strengthen New York and help all New Yorkers participate in the city’s rising prosperity. https://nycfuture.org.

About The Wagner Innovation Labs

Part of the NYU Robert F. Wagner Graduate School of Public Service, the Wagner Innovation Labs are a series of initiatives that marry theory and practice to promote informed, evidence based policy decision-making in a complex world. Each Lab has its own focus and approach, and operates independently, but all reflect NYU Wagner’s broad commitment to bringing scholars, thinkers, and practitioners together, both figuratively and literally, to improve the way policy is made.

The Citi Foundation works to promote economic progress and improve the lives of people in low-income communities around the world. We invest in efforts that increase financial inclusion, catalyze job opportunities for youth, and reimagine approaches to building economically vibrant cities. The Citi Foundation's “More than Philanthropy” approach leverages the enormous expertise of Citi and its people to fulfill our mission and drive thought leadership and innovation. For more information, visit www.citifoundation.com.