As the city enters a long-awaited spring and the bikes emerge, so too might a pattern: according to Citi Bike’s public data, men are riding more – far more – than women, averaging three times more rides. Of subscriber-based rides in July through December 2013, men took 76.3% of all trips, and women 23.7%. What is the cause of this disparity, and how can it be resolved?

Women typically attribute reduced cycling numbers to safety among car traffic, and considering Citi Bike’s distribution across some of the most congested parts of Manhattan and Brooklyn, lower female participation makes sense. Further analysis of the gender divide by bike share station shows that bike stations in Manhattan are predominantly used by men, while Brooklyn stations are more proportionately popular among women. Of the top ten stations for each gender, women preferred the Brooklyn residential neighborhoods of Fort Greene and Clinton Hill, while men were overwhelmingly represented in bustling midtown Manhattan. Women also chose stations in areas with fewer lanes of traffic, more limited truck traffic, fewer collision-based cyclist injuries in recent memory, and in some cases, fast access to bridge entrances; men most often chose stations with more traffic, some truck traffic, some collision-based cyclist injuries, and, typically, connectivity to major transit hubs.

See the map below to explore these stations: 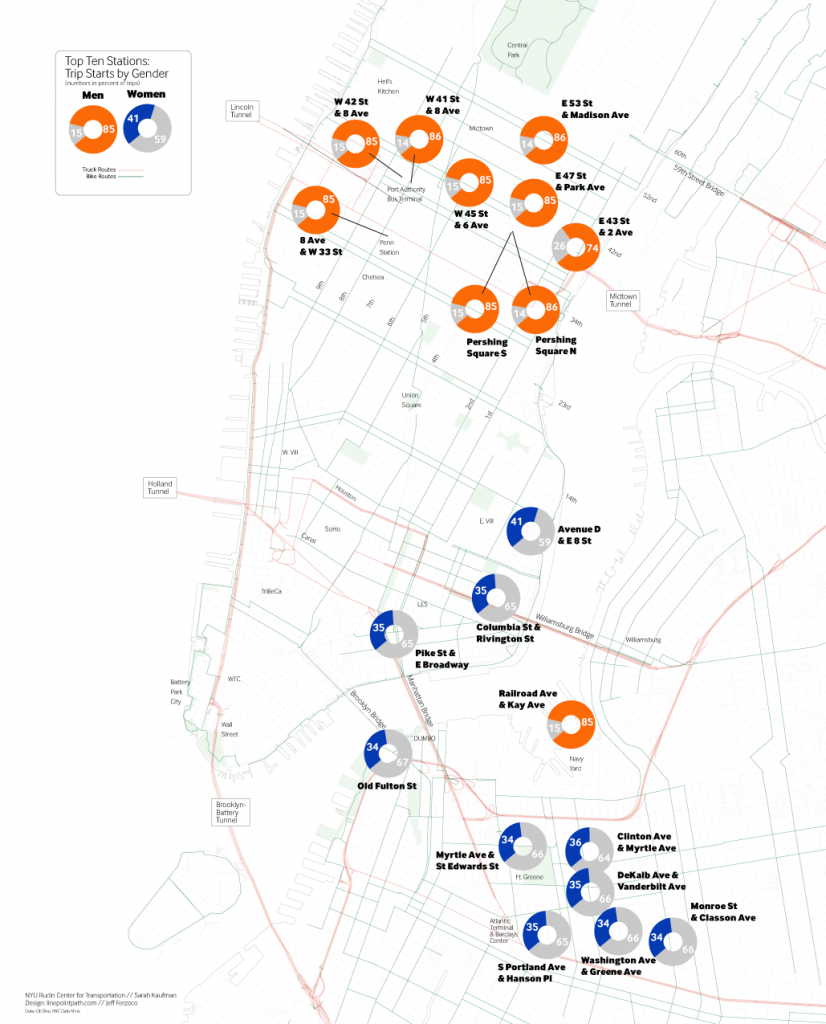 The station with the highest proportion of women, only 37.9%, is Station 266, the East Village’s 8th Street and Avenue D location. Although there is no dedicated bike lane on that block, the area has limited transit access, quieter traffic, and easy access to the tranquil East River waterfront and bridges.

The numbers of women bikers are universally important, since they teach us which locations are safe (and perceived to be). Station 266’s relative diversity can teach us a few things about biking in New York City: When it is (and feels) safe, people will bike as a last-mile transit solution, a connector to parks and recreation, and as a lifeline for improved job access from a distant location (ask an Avenue D resident if they would consider working in the Brooklyn Navy Yard, a treacherous commute by transit; biking would essentially halve the travel time).

Women have a long favorable history with biking. In the 1890s, women discovered the bicycle as the best means of personal mobility, providing exercise, freedom from reliance on men for transportation, and reform of requirements for wearing unwieldy undergarments. According to suffragist Susan B. Anthony, biking had “done more to emancipate women than anything else in the world.” (source)

In 2014, a safe, active travel mode that complements transit is important for all New Yorkers, and as the system expands farther into the city’s residential reaches of Brooklyn, Queens and uptown Manhattan, we will likely see a more balanced use of the system. By comparison, Washington, DC’s Capital Bikeshare system extends into multiple lower-traffic residential areas like Clinton Hill, and the subscriber rate is a more balanced 55% male, 45% female. (source)

Removing the barriers to cycling will universalize biking’s appeal, and bike share will become a truly mature transportation mode integrated into NYC’s fabric of mobility.

Data note: Station proportions were calculated by number of trip starts by subscribers, the only users for whom gender data is available.

P.S. Enjoy data uses like the one here? Be sure to join us for the Citi Bike data showcase night on May 28.