In the NYU Rudin Center’s August 2016 report on the “L Train Closure and Mitigation,” we suggested creative measures, including gondolas and scooter shares, to diversify commute and travel options. Today, we set out to explore the scooter share market around the world.
So, what is a scooter share?
Think bike share, but with electric scooters.
We looked at 10 scooter shares around the globe to see how they operated, including Cityscoot (Paris, France), Coup (Berlin, Germany), eBike (Chiayi, Taiwan), Enjoy (Milan, Italy), LoopShare (Vancouver, Canada), Scoot (San Francisco, US), Scooty (Brussels, Belgium), WeMo (Taipei, Taiwan), Yugo (Barcelona, Spain) and 2Hire (Rome, Italy).

[gallery ids="4554,4555,4556,4557,4558,4559,4560,4561,4562"]
How does it work?
For starters, all but one of the scooter shares (eBike in Chiayi, Taiwan) are privately operated. Some require a membership or registration fee (monthly, annual or one time) in addition to base charges per ride, but many are free to join. With the exception of Vancouver’s LoopShare, every system charges on a minute basis; LoopShare charges per kilometer traveled. Similar to bike share systems, most of the scooter shares we observed charge a flat rate for a set trip time, ranging from 10 to 30 minutes, and tack on a per-minute charge once the trip has surpassed that limit. Unlike bike shares, however, many of the scooter shares allow you to park anywhere within a zone. Users then pick up a scooter where it’s been parked (sometimes a designated charging spot). Because most scooter sharing programs have rolled out in the last year, most cities currently only have pilot zones (usually in the central business district), with the aim of expanding in the near future. Users tap into the network by locating and reserving scooters in a proprietary app. 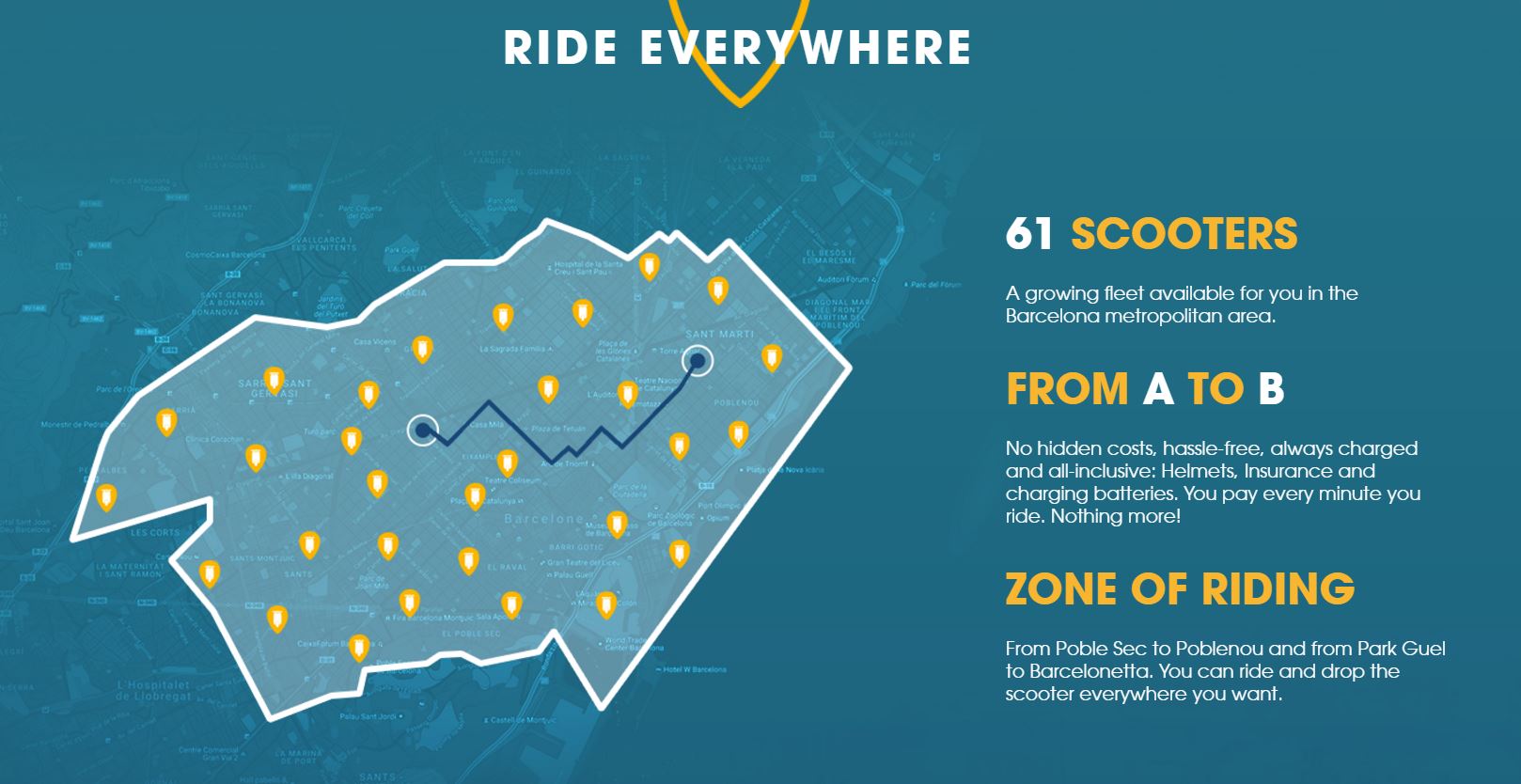 Graphic of the Yugo System[/caption]

What is the scooter riding experience?
Nearly all of the scooter shares employ electric scooters though each scooter seems as unique as the city its found in. Perhaps the most eye-catching, is the Taiwanese-developed Gogoro scooter, which hit the market only last year in Taiwan and is currently being utilized in both Taipei WeMo and Berlin Coup scooter sharing systems. The Gogoro features a “smart” mode, that tunes the scooter’s performance to optimize battery life. Paris’s Cityscoot is employing the German-based Govec scooter, featuring a fold-out wind and waterproof blanket to cover the rider’s legs on cold or rainy days. Barcelona’s Yugo scooter fleet is nearly indistinguishable from a vintage Vespa, save for it’s silent, emission-free electric motor. San Francisco’s Scoot launched with the a Govec scooter similar to Cityscoot in Paris, but is now transitioning to a lighter weight option that tops out around 30 miles per hour. Vancouver’s Loop scooters are perhaps the least traditional scooter of the bunch, with a very light-weight, minimal design and topping out at a speed of 25 miles per hour. The only non-electric scooters are from Milan’s Enjoy fleet of robust, three-wheeled Piaggio scooters, which are operated in tandem with a car-sharing service by Italian gas company Eni. 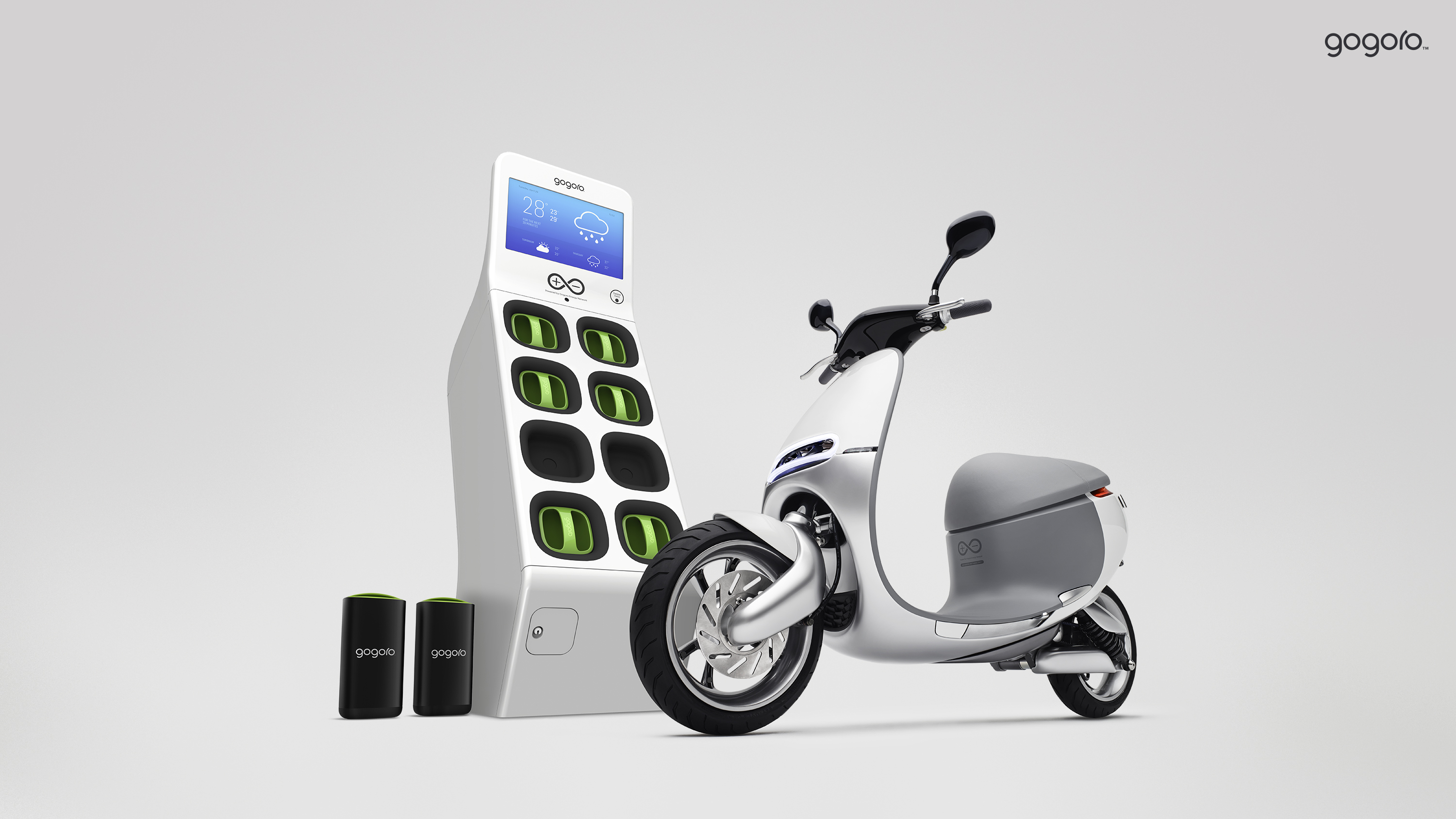 How are the scooters and network powered?
Because most of the scooters used in these programs are electric and require recharging, it can be challenging to keep them juiced-up. At least two of the ten scooter systems incentive riders to return the scooter to a charging dock; for instance, Cityscoot in Paris offers a two euro credit for docked scooters. Taipei’s WeMo system relies on a battery exchange system; when the scooters are running low on power, the batteries can easily be swapped by the rider for a fully charged one using one of the many battery charging kiosks around the city.  Only the publicly operated eBike system in Chiayi and Rome’s 2Hire for university students have assigned parking docks.

Opportunities for Future Study
Through this exploration of scooter shares, we've identified additional questions and opportunities for future study. These topics include, but are not limited to: