E-bikes look and behave like traditional bicycles, with the addition of an electric motor or battery for extra power when pedaling. This extra boost allows the rider to tackle hills and travel further distances with greater ease than with a traditional bicycle. According to a University of Tennessee study, e-bike users travel at higher average speeds (8.3 mph) compared to conventional bicycles (6.5 mph). A typical e-bike can handle between 20 and 60 miles per charge. The average price for a new electric bike is between $1,200 and $9,000. There are kits sold for around $500 that can convert standard bicycles to electric bikes. In addition to the purchase price, the cost of maintenance for an e-bike is roughly $100 a month.

The businesses most likely to utilize e-bikes are restaurant and logistics companies.

Last year, San Francisco-based food delivery company DoorDash partnered with electric bike company GenZe to provide its couriers with electric bicycles. They found that out of all the possible delivery modes (including cars, trucks, scooters and regular bikes), e-bikes are the easiest to use, have low carbon footprints and can more easily navigate parts of the city with high traffic and limited parking. Currently, the DoorDash e-bike partnership with GenZe only operates in San Francisco, Vancouver, Washington D.C. and Los Angeles.

E-bikes in New York City are primarily used by food delivery workers for extra assistance. In 2012, the NYC Department of Transportation that 50,000 delivery cyclists work in the city, the majority tending to be immigrants from China or Latin America with no documentation. Income for a delivery worker depends on the number of deliveries made in a typical 12- to 16-hour shift. Workers use e-bikes for extra assistance while pedaling, which helps to reduce stress on the body and increase the number of deliveries made during their shifts.

Workers typically purchase their own bikes; those who can reach the farthest delivery points on bikes are more attractive hires. The increased speed and range afforded by e-bikes result in more job opportunities and higher pay, so workers are motivated to purchase e-bikes over traditional bicycles.

In October 2017, Mayor Bill de Blasio and the New York City Police Department announced a crackdown on the use of e-bikes and the businesses that allow their employees to use them.

The City Administrative Code considers an e-bike to be a “motorized scooter” and “no person shall operate a motorized scooter in the City of New York” (19-176.2.(b)). City law also states that businesses may not use a motorized scooter for commercial purposes or allow its employees to use them on behalf of business. Immediately following Mayor de Blasio’s announcement of the e-bike crackdown, the NYPD confiscated up to 923 e-bikes from delivery cyclists (compared to 341 for all of 2016).

NYPD also issued 1,800 summonses to e-bike operators last year, with fines of up to $500. A civil summons to businesses using e-bikes is a $100 fine for the first offense and $200 for additional violations. As a public display of their commitment to the war on e-bikes, NYPD took to social media to show their progress. Below are posts pulled directly from various NYPD precinct twitter accounts: 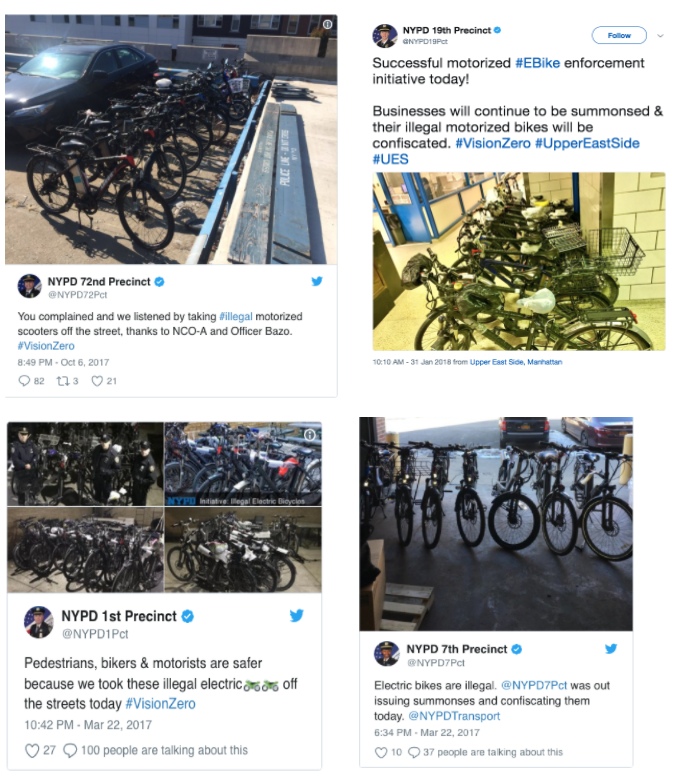 Several of the posts refer to the Vision Zero initiative, which aims to reduce traffic-related deaths and injuries on New York City Streets. However, no data is available about e-bike-related incidents; bicycle type is not recorded by the NYPD.

A 2016 study on commercial cycling summonses uses NYPD precinct data paired with data from the NYC Department of City Planning and the U.S. Census to illustrate the unfair policing of immigrant delivery cyclists. The following map displays NYPD data on summonses and tickets issued for commercial cycling infractions from 2007 to 2015. 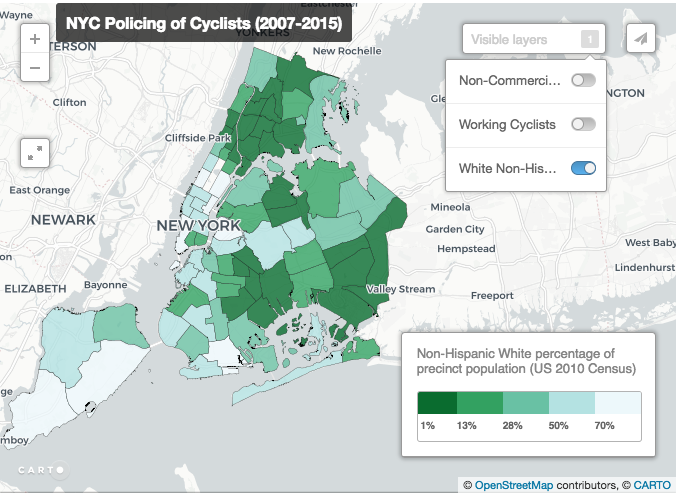 A vocal resident of the Upper West Side, Matthew Shefler, is determined to prove that the e-bikes delivery cyclists ride are dangerous. New York Public radio station WNYC used Shefler’s complaints to highlight the controversy on its show, which some New Yorkers believe triggered Mayor de Blasio to enforce the crackdown. The WNYC piece interviews Shefler in his Upper West Side neighborhood, where he tracked e-bike riders with a radar gun, ready to catch them riding faster than 20 miles per hour. Shefler said in the radio interview that he partly views speed measurement as a “science project” and wants to see if it is “possible to move the needle.” Listen to the full radio episode here.

Delivery cyclists, on the other hand, must deliver orders as rapidly as possible while enduring extreme working conditions. To be hired for a delivery job at most restaurants, workers must own bikes. Delivery cyclists work through all weather, providing food to NYC residents avoiding extreme heat, precipitation, and ice. Delivery workers battle with icy streets that trigger falls, and unknown objects hidden under mounds of snow. In addition to low wages and extreme weather, delivery cyclists face multiple fines and possible confiscation of their bicycles by NYPD. When this happens, the fined party must take a day off of work to attend traffic court and pay off the tickets. When someone works 12-hour shifts, seven days a week to try to make a livable wage, losing a day of wages to pay off tickets and reclaim their bicycle makes the work itself no longer worthwhile. For immigrant delivery cyclists working in NYC, the physical and mental demands of the job are less of a project and more of a means of survival.

E-bikes around the world

Outside of New York, cities across the globe accept and encourage the use of electric powered bicycles. In Europe, several countries offer incentives to purchasing e-bikes. Sweden offers a 25% subsidy for electric bike purchases, and the city of Stockholm will upgrade its bike share fleet with 5,000 electric bicycles. Oslo, Norway has a 10,000 kroner (or $1,200) cargo e-bike incentive. Oslo’s electric cargo bike push follows a recent temporary driving ban on diesel-fueled vehicles to improve air quality. Furthermore, in an effort to get more French citizens to adopt zero emission modes of transportation, France offered 200 Euros in financial assistance for pedal-assist electric bike purchases. Additionally, the French bike share system Velib plans to make one-third of its 20,000 new bikes feature an electric motor.

While New York City battles with its stance on the use of e-bikes, the rest of the world continues to embrace them as a viable mode of clean transportation.  The NYU Rudin Center for Transportation will continue to track the development of public policy for e-bikes and how it affects workers that depend on them in New York City.

Update: On April 3rd, 2018 Mayor Bill de Blasio announced that DOT will begin the rulemaking process to clarify that pedal-assist bicycles are legal to operate in New York City. Find out more here.

The Murky Legality of E-Bikes

NYPD Crack Down on Illegal E-bikes in 24-hour Blitz

Intro to Electric Bikes – What They are & How They Work

Are e-bikes faster than conventional bicycles?