Transit service disruptions due to flooding have become an expected consequence of heavy rainfall in NYC. The Regional Planning Association found that one-fifth of subway station entrances are vulnerable to flooding during extreme rain, which has been occurring more frequently in recent years. Fixing this problem would require a massive overhaul of our current infrastructure. The city must turn to more feasible solutions. Likely, this includes “reducing paved surfaces, planting trees, daylighting underground streams, creating more parks and green roofs” (Chang) to reduce stormwater runoff overall. By nature, subway systems will inevitably flood because they are underground; reducing runoff helps to fortify the subway against water damage.

Thus far, the MTA has spent more than $2.6 billion protecting subway openings against flooding, replacing pumps, and fortifying tunnels under the East River (Barnard et al.). However, these efforts have focused mainly on coastal and low-lying areas, which flood due to rising sea levels and high tides. However, many stations that flooded during the heavy rainfall of Hurricane Ida in 2021 sit at higher elevations. The variation was due to the extreme rainfall rather than water rising from nearby bodies of water.

New York is, of course, not the only city dealing with the consequences of climate change. Other cities have addressed subway flooding in unique and creative ways. In Tokyo, Tokyu, a private rail operator, with Japanese government support, constructed a massive underground cistern that can capture and divert up to 4,000 tons of floodwater runoff at the popular Shibuya station or, for visualization purposes, hold the Statue of Liberty (Tabuchi & Schwartz, Tabuchi). Taipei, Taiwan, raised subway entrances slightly to avoid runoff from street-level flooding (Barnard et al.). While New York has also explored this solution, it compounds the accessibility issues prevalent throughout the subway. Bangkok has a newer subway system (opened in 2004, a century later than New York’s); they constructed station entrances in low-lying areas at four feet above ground with heavy, floodproof doors (that withstood a monsoon), allowing subway service to remain uninterrupted (Nugent). New York City’s century-old subway system would need to retrofit these types of flood-resistant measures used in newer systems or reduce flood runoff through other means.

Several attempts have been made to floodproof the New York City subway system, most notably the Flex-Gate, shown below. The first image shows the Resilient Tunnel Plug developed by engineers at ILC Dover. Initially a project developed with the U.S. Department of Homeland Security to address potential terrorist attacks in tunnels, the plug also can prevent flooding. 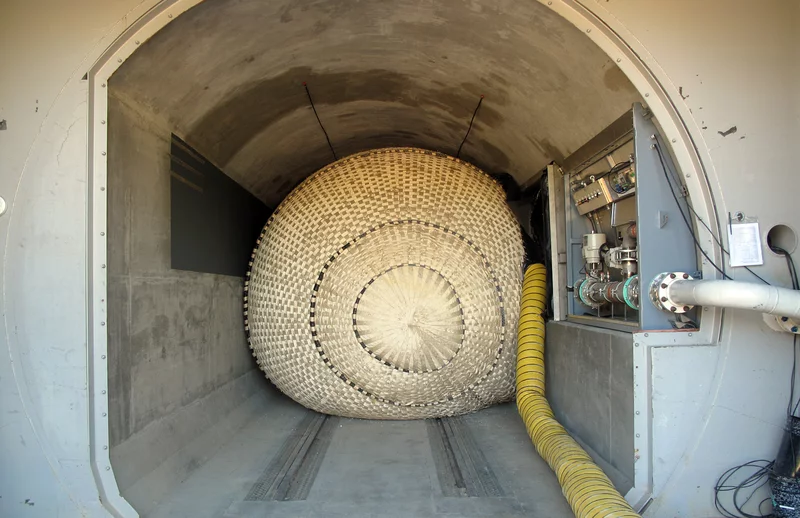 This project attracted the attention of New York City Transit officials who saw this product's potential as a flood mitigation tool. ILC Dover was given the following requirements to develop the ideal tool: “It had to withstand impact from a piece of timber 1’ in diameter and 12’ long moving at 1 foot per second. It had to provide a barrier against 16 feet of water and withstand waves 1 foot high moving at 5 feet per second. It had to be deployable in winds up to 60 MPH, simple enough to use that one or two workers could deploy it in minutes, and compact so it wouldn’t impede commuters when stored at the point of use.” (ILC Dover).

In time, the Flex-Gate was born.

The image below shows the testing phase of the Flex-Gate, a product now used across subway entrances in Manhattan. As of 2021, 68 low-lying subway and PATH stations in Lower Manhattan were equipped with a Flex-Gate (Berg). Ultimately, “it functions like a high-strength, horizontal window shade that covers subway entrances to prevent water from entering. It’s constructed from rugged, textile-based materials and corrosion-resistant hardware and stored in a container mounted at a stairwell opening. Flex-Gate can be deployed by 1-2 people in less than 15 minutes” (ILC Dover). 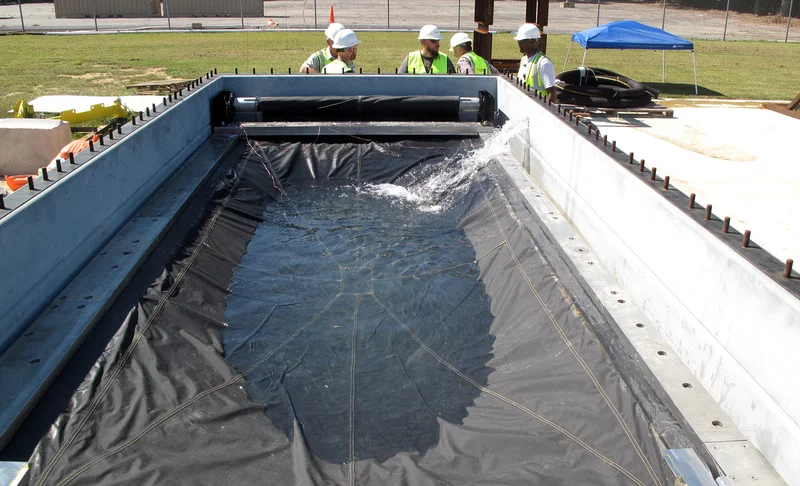 The Flex-Gate during its testing phase for feasibility in the NYC Subway. Source: Joel Rose/NPR

The Flex-Gate can manage flooding up to 16 feet deep. Even with some slight leakage, the amount of water that bypasses the gate is minimal compared to the 13 million gallons the subway regularly pumps, even on a dry day, due to groundwater. Our older infrastructure does not offer the opportunity to build a new, flood-proof subway system like more modern systems. The Flex-Gate offers a retrofitted solution that can be quickly and easily deployed for an effective fix. 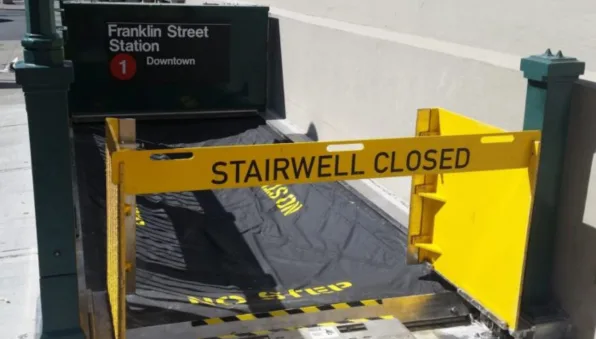 As a new storm season descends on New York City, these preparations will hopefully hold off some of the damaging waters. What more can you ask for? Other than being able to enter the station during severe storms…