Presented by NYU Wagner, NYU Steinhardt, and The Institute of Human Development and Social Change (IHDSC)

With early care and education policies center stage in discussions of COVID relief, infrastructure and jobs proposals, and congressional legislative and budget proposals all expected soon, this may be the most opportune time to discuss true possibilities for children's development in a generation.

Join Dr. Hirokazu Yoshikawa and Dr. Ajay Chaudry for a presentation and discussion of Cradle to Kindergarten: A New Plan to Combat Inequality. Co-authored by Dr. Taryn Morrissey and Dr. Christina Weiland, and now being released in its second edition, their book presents a comprehensive, research-driven plan to invest in early-childhood education. The 2021 edition is updated with newly revised proposals and cost estimates that incorporate what they learned working with several state leaders on developing cradle-to-kindergarten plans and are responsive to the current political and policy moment. Their proposals include a federal child care guarantee, universal early education starting at age 3, and reforming Head Start to expand the program to more younger children and enhance the services provided to better meet the needs of families living in areas of concentrated poverty.

Cradle to Kindergarten: A New Plan to Combat Inequality can be purchased here.

NYU Wagner provides reasonable accommodations to people with disabilities. Requests for accommodations for events and services should be submitted at least two weeks before the date of the accommodation need. Please email wagner.events@nyu.edu or call 212.998.7400 for assistance. 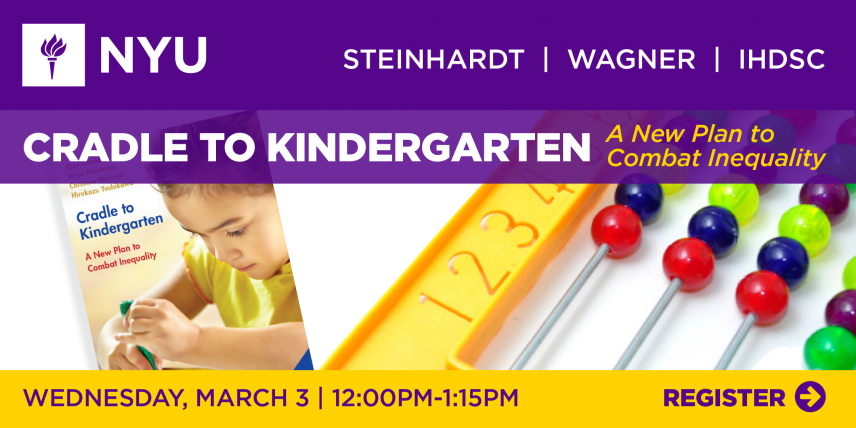