Everything you ever wanted to know about Ranked-Choice Voting!

This year New York City elections will use ranked-choice voting (RCV) for primary and special elections for Mayor, Public Advocate, Comptroller, Borough President, and City Council, after NYC residents approved it in a referendum in 2019. RCV is used in some form in 24 states and half a dozen countries worldwide as a way to provide representation for a broader range of views than conventional "first past the post" elections. Join Rosemonde Pierre-Louis, Chief Operating Officer of NYU McSilver Institute for Poverty Policy and Research and executive board member of the Committee for Ranked-Choice Voting NYC along with Nicole Yearwood, Manhattan Organizer for Rank The Vote NYC, for an introduction to Ranked-Choice Voting. We will discuss how it differs from our previous form of elections and how it strengthens democracy and expands representation. Practice your ranking technique in a mock election and get all your questions answered.

Rosemonde Pierre-Louis is the Chief Operating Officer at the McSilver Institute for Poverty Policy and Research at NYU.  From 2014-2016 Rosemonde served as Commissioner of the Mayor’s Office to Combat Domestic Violence and from 2006-2013 was Manhattan Deputy Borough President. She is the Founder of the Frederick Douglass Boulevard Alliance, serves on the Board of Directors of Eleanor’s Legacy and New American Leaders Action Fund, and is Chairperson of the Haitian Roundtable. In 2020, she was appointed to the Executive Board of the Committee for Ranked Choice Voting NYC. Rosemonde completed her undergraduate studies in political science at Tufts University, and received a Juris Doctor from Case Western University School of Law.

Nicole Yearwood is Manhattan organizer for Rank the Vote NYC. She previously worked for the Manhattan Borough President’s office and for the last two years worked to inform communities about plans for the 2020 Census. For almost nine years she was Director of Government Relations for a non-profit that provides free programs in New York City parks, where she raised more than $6 million in capital and discretionary funding and conducted workshops that taught community groups how to build relationships with their elected representatives. She founded EducatedVoter.net in 2015, a social media platform aimed at fostering civic participation. Nicole received her Master of Public Administration degree and a BA in Sociology from the State University of New York at Binghamton.

NYU Wagner provides reasonable accommodations to people with disabilities. Requests for accommodations for events and services should be submitted at least two weeks before the date of the accommodation need. Please email john.gershman@nyu.edu or call 212.998.7400 for assistance.
Register to Attend 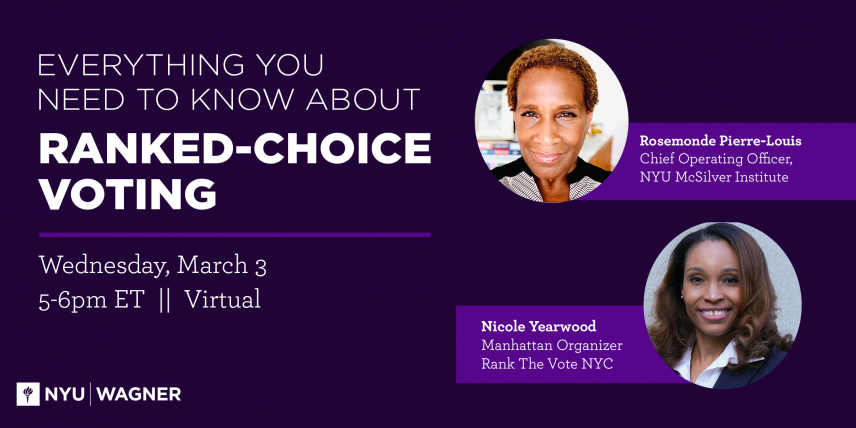