Under threat: Thai democracy and human rights since the 2019 elections

In March 2019, Thailand held its first elections since a military coup overthrew an elected government in May 2014 and established a military dictatorship that ran roughshod over Thailand’s democracy and protections for human rights. The recent elections were anything but free and fair, and resulted in a new government led by the same general-cum-dictator Prayuth Chan-o-cha and his allies. Since this new government took power in July 2019, Thailand’s human rights record has worsened with new violent attacks on pro-democracy activists, the continued criminalization of non-violent activists, and ongoing threats to Thailand’s newly-minted opposition political parties.

Throughout the past five years, a small band of committed Thai civil society leaders and activists has defied military rule to mount a struggle for human rights, democracy, and the rule of law. Two prominent figures from these movements are traveling to Washington, DC and NYC to speak about the ongoing challenges and threats to human rights and democracy in Thailand.

Sirikan “June” Charoensiri, a lawyer with the Thai Lawyers for Human Rights, received the State Department’s International Women of Courage award in 2018. Yingcheep “Pow” Atchanont is the Program Manager for iLaw, a Thai civil and political rights policy research and campaigns organization.

NYU Wagner provides reasonable accommodations to people with disabilities. Requests for accommodations for events and services should be submitted at least two weeks before the date of the accommodation need. Please email john.gershman@nyu.edu or call 212.998.7400 for assistance. 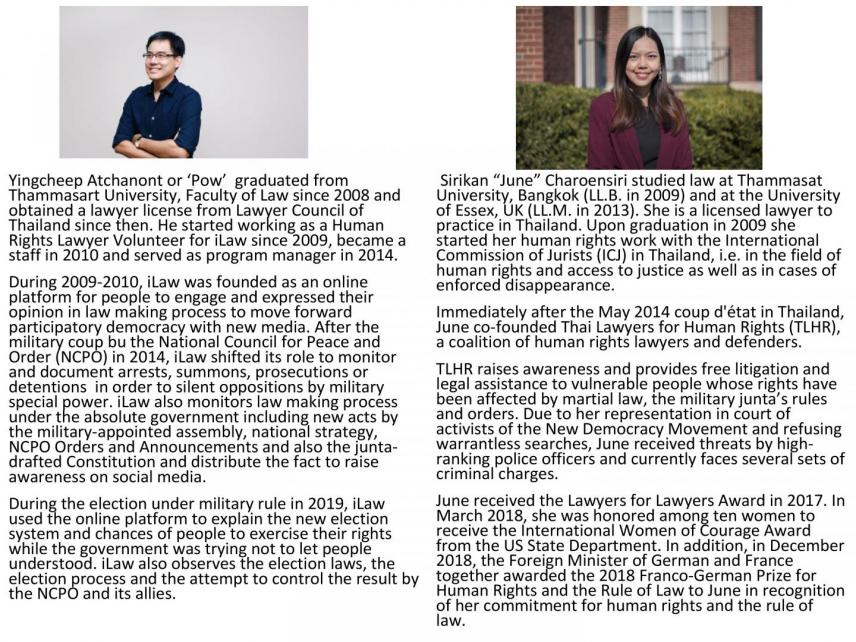