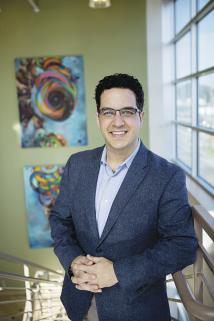 NYU Wagner alumnus Jason Franklin (PhD, 2014) has been named to The Chronicle of Philanthropy’s “40 under 40” honor roll of innovators at the intersection of philanthropy and public service. Franklin, whose doctoral work at the Wagner school explored issues of public administration, currently serves as W.K. Kellogg Community Philanthropy Chair at the Dorothy A. Johnson Center for Philanthropy at Grand Valley State University of Grand Rapids, Michigan.

Formerly the inaugural president of Bolder Giving, a New York nonprofit created by Bill and Melinda Gates, he works to advance the field of community philanthropy in particular. “Mr. Franklin hopes to study how people give through community foundations, giving circles, and donor networks in specific geographic areas or to address issues of common interest,” according to The Chronicle profile.

“These leaders and the others ​The Chronicle​ has selected as people under 40 to watch are trailblazers crafting innovative new approaches to entrenched problems.In their work today, we get a preview of what the future might hold.”