Research Analyst
Center for Innovation through Data Intelligence, NYC Office of the Mayor 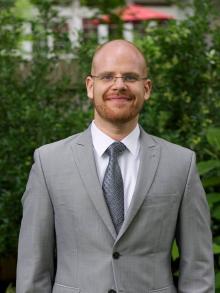 I was in a job at a think tank in DC where I had no room for advancement without a graduate degree, and I was kind of lost. I had heard about Wagner from a friend, and after researching it online applied on a whim. After Admitted Students Day, where I first interacted with my future classmates, I realized there was nowhere else I could have chosen for graduate school: The caliber of the community and network truly is unmatched.

How did you find your first post-Wagner job?

Through my capstone client--and it was an unmitigated disaster, so much so that I quit after three months without anything in place. But my Wagner professors quickly helped me rebound: two months later, when attending an event at Wagner, one of my professors introduced me to my current boss who just happened to be hiring! I'm still at that job (and very happy!) more than two years later.

I am a data analyst in the New York City Mayor's Office. I work in a small unit under the Deputy Mayor for Health and Human Services, and we use data to help solve the City's most pressing social problems. I am primarily responsible for homelessness, but also work with data from welfare, corrections, children's services, public housing, and more.