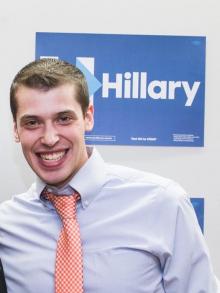 I chose Wagner for two reasons. First, while working in New York government and considering graduate school programs, both in and outside of New York City, I realized that many of the leaders in local and state government and politics as well as the nonprofit sector in New York had graduated from Wagner. I had the opportunity to speak with multiple alumni in my professional network about Wagner and they all had great things to say. The second reason was the flexibility of the program for part-time students. Wagner offered the same availability of classes on evenings and weekends and for students who are part-time as opposed to full-time. This made a great difference as I decided to stay in New York City for graduate school and continue working full-time.

How did you find your first post-Wagner job?

I worked full-time throughout my time at Wagner; however, while at Wagner I moved into two new roles. After four years of working in the New York State Assembly, I accepted a job with New York City Public Advocate Letitia James working in the policy department and serving as a liaison to the LGBTQ community. Following that, I moved onto Gay Men’s Health Crisis (GMHC) as the Director of Policy and Public Affairs, thanks to connections I made during my time working with the LGBTQ community in the Public Advocate’s office.

What are the advantages of the Wagner alumni network?

In New York, many leaders in local and state government and politics and the nonprofit sector are Wagner alumni, which creates great opportunities to network. The network of alumni working in New York City was one of the main reasons I decided to attend Wagner. In addition, the university offers an array of public events (happy hours, forums, etc.) to allow students, alumni, and the public to gather and continue learning about the most pressing issues facing our world today.