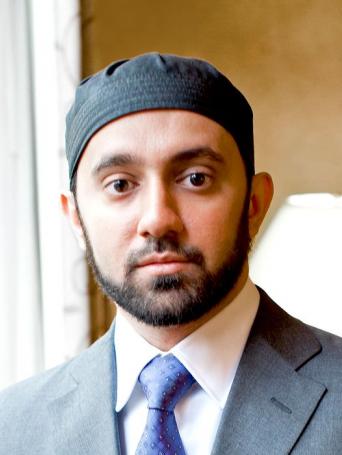 Imam Latif's exceptional dedication and ability to cross faith and cultural boundaries on a daily basis brought him recognition throughout the city, so much so that in 2007, Mayor Michael Bloomberg nominated Imam Latif to become the youngest chaplain in history of the New York City Police Department. He was 24. Since then, Imam Latif has dedicated himself to America's largest Police Department, and has developed tremendously valuable skills as a spokesperson for co-existence, mutual understanding and productive relationships between cultures, communities and religions.

At NYU, Imam Latif has not only managed to build a strong Muslim institution at NYU, but he has offered his experience and awareness to the U.S. State Department, various institutions, corporations, mosques and other communities in the United States, Canada, Denmark, the Netherlands, Spain and Egypt. He is a highly sought-after speaker, offering to diverse audiences his unique blend of motivational speaking, leadership insights, spiritual development and religious awareness. He has been invited to speak at the University of Alabama-Birmingham, the University of Pennsylvania, the University of California-Berkeley, Columbia University, Princeton University and Harvard. Imam Latif has been quoted or otherwise featured on numerous media outlets including BBC, NPR, CNN, the New York Times, Newsweek, Time Magazine, BET and GEO TV. Amongst many awards and distinctions for leadership and community service over the last few years, Imam Latif was most recently named one of 500 most influential Muslims in the world in 2009 by Georgetown University's Prince Alwaleed Bin Talaal Center for Muslim-Christian Understanding and The Royal Islamic Strategic Studies Centre.

In the context of an increasingly polarized American society, this course seeks to train students to mobilize diverse faith communities together for the greater good. Unleashing the power of their own story, students will articulate their values and explore the ways it can be shared. The course will draw on case studies from historical and contemporary faith leaders who have achieved success in creating sustainable change, as well as interrogating relevant current affairs as they arise.

UPADM-GP.260.: What Really Matters? Leadership with No Regrets

In study after study, people lying on their deathbeds overwhelmingly say they regret five things at their end of their life: 1. Not living a life of authenticity 2. Working too hard at the expense of their relationships 3. Not having the courage to express their feelings 4. Not staying in touch with friends. 5. Not letting themselves be happier. For leaders, it's not any different.  This course unpacks each of these "regrets" with readings, exercises, meditation, deep listening, skill development and leadership theory, examining historical and contemporary answers to the question of what really matters in life, and providing the space for students to grapple with the question themselves.