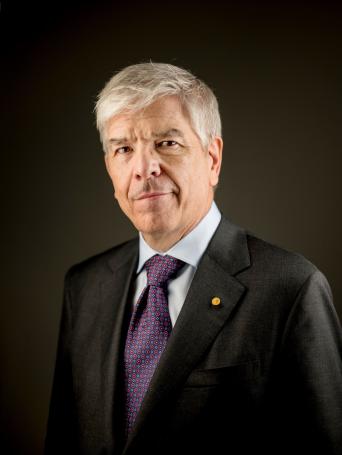 Paul Romer, economist and policy entrepreneur, is a co-recipient of the 2018 Nobel Prize in Economics Sciences and University Professor in Economics at NYU. He has spent his career at the intersection of economics, innovation, technology, and urbanization, working to speed up human progress.

Paul received the Nobel Prize in Economic Sciences for his work “integrating technological innovations into long-run macroeconomic analysis,” which integrated ideas and innovation into economic models for the first time, making clear the societal benefits possible when people join together and collaborate in new ways.

Paul previously served as the Chief Economist at the World Bank where he worked to advance the multilateral institution’s critical research function. He is the Founding Director of NYU’s Marron Institute of Urban Management, which works to help cities plan for their futures and improve the health, safety, and mobility of their citizens, as well as the founder of the Charter Cities initiative, which introduced a framework designed to help traditionally disenfranchised populations share in the benefits of rapid urbanization.

Paul has made numerous contributions to public policy, including writing an opinion for the United States Justice Department on the Microsoft Antitrust ruling, serving on the Singaporean Prime Minister’s Independent Academic Advisory Panel on University Policy, and consulting for a host of other governments and legislators on policy initiatives tied to education, urbanization, science, technology, and innovation.

Prior to coming to NYU, Paul taught at Stanford University’s Graduate School of Business and in the Economics departments of the University of California, Berkeley, the University of Chicago, and the University of Rochester. While teaching at Stanford, Paul founded Aplia, an education technology company dedicated to increasing student effort and classroom engagement. To date, students have submitted more than 2.4 billion answers to homework problems on the Aplia website. Aplia was sold to Cengage Learning in 2007.

He is currently a Research Associate at the National Bureau of Economic Research, a Fellow of the American Academy of Arts and Sciences, and a non-resident scholar at Macdonald-Laurier Institute in Ottawa, Ontario. In 2002, he received the Recktenwald Prize for his work on the role of ideas in sustainable economic growth.

His writing has appeared in the Wall Street Journal, the Financial Times, Econometrica, and The American Economic Review, and is a regular speaker at events ranging from TED and Aspen Ideas Festival to editorial boards and industry conferences worldwide.