The Color Bind: Talking (and not Talking) about Race at Work

Since the 1960s, the dominant model for fostering diversity and inclusion in the United States has been the “color blind” approach, which emphasizes similarity and assimilation and insists that people should be understood as individuals, not as members of racial or cultural groups. This approach is especially prevalent in the workplace, where discussions about race and ethnicity are considered taboo. Yet, as widespread as “color blindness” has become, many studies show that the practice has damaging repercussions, including reinforcing the existing racial hierarchy by ignoring the significance of racism and discrimination. In The Color Bind, workplace experts Erica Foldy and Tamara Buckley investigate race relations in office settings, looking at how both color blindness and what they call “color cognizance” have profound effects on the ways coworkers think and interact with each other.

Based on an intensive two-and-a-half-year study of employees at a child welfare agency, The Color Bind shows how color cognizance—the practice of recognizing the profound impact of race and ethnicity on life experiences while affirming the importance of racial diversity—can help workers move beyond silence on the issue of race toward more inclusive workplace practices. Drawing from existing psychological and sociological research that demonstrates the success of color-cognizant approaches in dyads, workgroups and organizations, Foldy and Buckley analyzed the behavior of work teams within a child protection agency. The behaviors of three teams in particular reveal the factors that enable color cognizance to flourish. While two of the teams largely avoided explicitly discussing race, one group, “Team North,” openly talked about race and ethnicity in team meetings. By acknowledging these differences when discussing how to work with their clients and with each other, the members of Team North were able to dig into challenges related to race and culture instead of avoiding them. The key to achieving color cognizance within the group was twofold: It required both the presence of at least a few members who were already color cognizant, as well as an environment in which all team members felt relatively safe and behaved in ways that strengthened learning, including productively resolving conflict and reflecting on their practice.

The Color Bind provides a useful lens for policy makers, researchers and practitioners pursuing in a wide variety of goals, from addressing racial disparities in health and education to creating diverse and inclusive organizations to providing culturally competent services to clients and customers By foregrounding open conversations about race and ethnicity, Foldy and Buckley show that institutions can transcend the color bind in order to better acknowledge and reflect the diverse populations they serve. 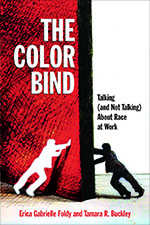