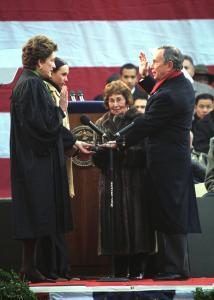 From climate change to inequality, urban infrastructure to transportation systems, public health to public schools, now more than ever society’s extraordinary challenges require exceptional public leaders committed to fact-based governance. Bloomberg Philanthropies and NYU’s Robert F. Wagner Graduate School of Public Service today announced the Georgina and Charlotte Bloomberg Public Service Fellows Program, launching in the 2021-2022 academic year, to help ensure that the most dedicated and innovative future leaders have access to, and robust training for, careers in public service. Bloomberg Philanthropies has committed $25 million to endow the competitive program, which is named after founder and 108th New York City mayor Michael R. Bloomberg’s daughter, Georgina, and mother, Charlotte, both of whom earned degrees from NYU – Georgina from the Gallatin School of Individualized Study in 2010 and Charlotte from the School of Commerce, Accounts, and Finance (now the Stern School of Business) in 1929.

The inaugural group of Bloomberg Public Service Fellows will be selected for the academic year 2021-22, and the two-year program is expected to offer up to 20 students per year full tuition scholarships to complete their NYU Wagner Master of Public Administration (MPA) or Master of Urban Planning (MUP) degrees. This financial assistance, plus paid internships, will ensure that economic barriers do not prevent deserving students from receiving the education and guidance needed to become part of the next generation of diverse public service leaders. The program’s unique curriculum will truly use New York City, one of the most complex cities in the world, as its classroom, providing a greater understanding of New York’s many municipal systems and the non-profit organizations which support them. Leadership development programming and career guidance will be available for all Bloomberg Fellows, and they will be connected to elected and community leaders as well as to Bloomberg Philanthropies’ network of mayors and government leaders for work opportunities and one-on-one mentoring.

“When I served as mayor, our team and the entire city benefited from the talent and drive of NYU Wagner graduates," said Bloomberg. "Now, as our foundation works to strengthen and diversify city leadership across the country, I look forward to seeing the big things that the Georgina and Charlotte Bloomberg Public Service Fellows go on to do - here and around the world.”

NYU President Andrew Hamilton said, “Seldom have the times demanded excellence from our public servants more than they do now. Seldom have the problems been more intense, or the doubts about government’s capabilities greater. It is a moment that cries out for leadership -- capable, knowledgeable, impartial, fair-minded, analytic, far-sighted, and honest people determined to make things better for their fellow citizens. And that is the discernment and timeliness of this generous gift -- it comes at just the right moment, when there is a hunger for the finest young minds -- well-trained and highly professional -- to commit to taking on these challenges. That is precisely the kind of public servants this fellowship program will produce year after year.”

Sherry Glied, Dean of NYU Wagner, said, “For over 80 years, NYU Wagner has been preparing public service leaders to translate ideas into actions that have an effective and lasting impact on the public good. This transformative gift from Bloomberg Philanthropies will amplify our ability to recruit promising students into public service careers and give them the education, leadership skills, and networks that will allow them to quickly get out there and start tackling our country's urban challenges.”

The Georgina and Charlotte Bloomberg Public Fellows program will be overseen by Mitchell L. Moss, the Henry Hart Rice Professor of Urban Policy and Planning at NYU Wagner. He has directed research projects for the National Science Foundation, National Oceanic and Atmospheric Administration, U.S. Department of Homeland Security and the Port Authority of New York & New Jersey. He is also an Honorary Member of the American Institute of Architects - New York Chapter.

“As a three-term mayor of New York City, Mike Bloomberg understood that government depends on energetic, intelligent and highly skilled professionals, " said Moss. "The Bloomberg Fellows program at NYU's Wagner School will produce leaders dedicated to meet the challenges of the 21st century."

Interested students should visit this page for more information.