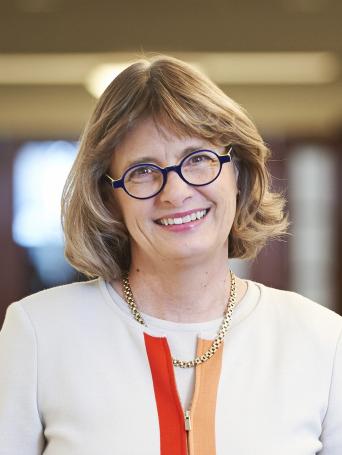 Vicki Been works at the cutting edge of legal scholarship at the intersection of land use, urban policy and housing. Been, who has been on faculty at NYU Law School since 1990, authored one of the first major articles on the distributional fairness of environmental and land use policies. Been also writes about the Fifth Amendment prohibition against the taking of property without just compensation, and about land use and housing policy. She is the co-author of a leading land use casebook, Land Use Controls, with Robert Ellickson.

Been's current research focuses on the effects the mortgage foreclosure crisis has on neighborhoods, families, and children, and on the role of zoning and other regulations in shaping development patterns. Been is a 1983 graduate of New York University School of Law, where she was a Root-Tilden Scholar. She clerked for Judge Edward Weinfeld of the Southern District of New York and for Justice Harry Blackmun of the Supreme Court of the United States.

Since Brooklyn Heights was designated as New York City's first landmarked neighborhood in 1965, the Landmarks Preservation Commission has designated 120 historic neighborhoods in the city. This paper develops a theory in which landmarking has heterogeneous impacts across neighborhoods and exploits variation in the timing of historic district designations in New York City to identify the effects of preservation policies on residential property markets. We combine data on residential transactions during the 35-year period between 1974 and 2009 with data from the Landmarks Preservation Commission on the location of the city's historic districts and the timing of the designations. Consistent with theory, properties just outside the boundaries of districts increase in value after designation. Further, designation raises property values within historic districts, but only outside of Manhattan. As predicted, impacts are more positive in areas where the value of the option to build unrestricted is lower. Impacts also appear to be more positive in districts that are more aesthetically appealing.

When Superstorm Sandy struck the New York City metropolitan area, it brought to light serious limitations in the ability of federal disaster aid programs to serve the residents of high-cost, high-density cities. Our current models of rehousing, repair, and rebuilding are geared toward low-density, owner-occupied, single-family homes. Yet, more than half the world’s population lives in dense, urbanized areas, many of which are susceptible not only to hurricanes, but also to earthquakes, tsunamis, and tornadoes.

The State of New York City’s Housing and Neighborhoods in 2013 report , published annually by the NYU Furman Center, provides a compendium of data and analysis about New York City’s housing, land use, demographics, and quality of life indicators for each borough and the city’s 59 community districts.

The report combines timely and expert analysis of NYU Furman Center researchers with data transparency. It is presented in three parts:

Each year, the State of New York City’s Housing and Neighborhoods describes, contextualizes, and provides analysis on a pressing and policy-relevant issue affecting New York City. In 2013, the report focuses on economic inequality in New York City, analyzing changes over time in the distribution of the city’s income, economic segregation of city residents, and the neighborhood environments experienced by people of different incomes.

The data section provides current and historical statistics for over 50 housing, neighborhood, and socioeconomic indicators at the city, borough, and community district levels. It also includes indicator definitions and rankings; methods; and an index of New York City’s Community Districts and Sub-Borough Areas.

Six years ago, the housing bubble burst and sent the nation spiraling into the most severe recession since the Great Depression. Today, encouraging signs of recovery—sustained employment growth, rising housing starts, increased numbers of home sales, and generally increased sales prices— provide reason to believe that the nation and New York City have turned the corner. In this year’s State of New York City’s Housing and Neighborhoods report (State of the City) we examine how New York City is faring in the aftermath of the crisis.

In 2001, the Furman Center for Real Estate and Urban Policy released the first edition of the State of the City to make publicly available the enormous amount of data regarding housing and neighborhood conditions in New York City collected each year. Today, the State of the City includes an unprecedented number of indicators, measuring everything from the health of the housing market to the health of the city’s residents and the educational attainment of the city’s children. The report serves as a medium through which the Furman Center can investigate new data, describe and contextualize current trends, and highlight the pressing issues affecting New York City. This year’s State of the City focuses on how New York City is performing in the aftermath of the housing crash and recession, investigating changes in the city’s built environment, housing market conditions, population demographics, and health, education, and crime indicators.

Where data are available, this year’s State of the City compares New York City to the next four largest cities in the United States—Chicago, Houston, Los Angeles, and Philadelphia—to help contextualize the city’s experience during the housing boom and bust. In Sections 4 and 5, we also compare New York City residents (or “New Yorkers”) to the residents of these other large cities.

Using a rich database of non-prime mortgages from New York City, we find that census tract level neighborhood characteristics are important predictors of default behavior, even after controlling for an extensive set of controls for loan and borrower characteristics. First, default rates increase with the rate of foreclosure notices and the number of lender-owned properties (REOs) in the tract. Second, default rates on home purchase mortgages are higher in census tracts with larger shares of black residents, regardless of the borrower’s own race. We explore possible explanations for this second finding and conclude that it likely reflects differential treatment of black neighborhoods by the mortgage industry in ways that are unobserved in our data.

The Furman Center is pleased to present the 2011 edition of the State of New York City’s Housing and Neighborhoods. In this annual report, the Furman Center compiles statistics on housing, demographics and quality of life in the City, its five boroughs and 59 community districts.This year we examine the distribution of the burden of New York City’s property tax, analyze the changing racial and ethnic makeup of city neighborhoods, evaluate the state of mortgage lending in New York City, and compare federally-subsidized housing programs across the five most populous U.S. cities.

In the last few years, millions of homes around the country have entered foreclosure, pushing many families out of their homes and potentially forcing their children to move to new schools. Unfortunately, despite considerable attention to the causes and consequences of mortgage defaults, we understand little about the distribution and severity of these impacts on school children. This paper takes a step toward filling that gap through studying how foreclosures in New York City affect the mobility of public school children across schools. A significant body of research suggests that, in general, switching schools is costly for students, though the magnitude of the effect depends critically on the nature of the move and the quality of the origin and destination schools.

New York City policymakers are planning for a city of over 9 million residents by 2030, a large increase from today. A central goal of City officials is to accommodate this increase while simultaneously improving the City’s overall environmental performance, addressing externalities arising from traffic congestion and providing increased access to affordable housing. The requirement in the City’s zoning code that new residential construction be accompanied by a minimum number of off-street parking spaces, however, may conflict with this goal. This paper combines a theoretical discussion of parking requirements in New York City with a quantitative analysis of how they relate to transit and development opportunity. It draws direct relations between minimum parking requirements with the rise in housing prices and the reduction of density.